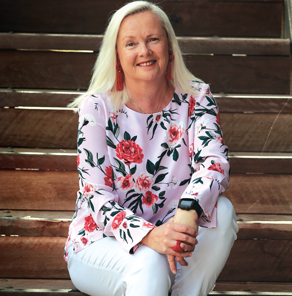 A flash of bright pink catches my eye as I wait for the road to clear before heading into the afternoon crowds at Peregian Beach to catch up with long time Sunshine Coast resident, Jo Roff. Even at a distance it’s hard to miss Jo in her colourful clothing – a passion for which I’m soon to learn goes so far back she can’t really remember when it started.

The colourful clothes fit well with the often-colourful life of the 49-yearold social worker who has spent years in the service of our region’s troubled youth and local families, helping them to find a way through the daily struggle of their lives. For a young Jo, life was all about family. While an only child herself, she grew up in Wangaratta and Geelong, Victoria, surrounded by uncles and aunts. Her Dad, Michael Donovan, was one of seven children. Cousins were numerous and second cousins totalled in the hundreds.

While Michael held a number of jobs during Jo’s childhood, she marks his time managing a pub in Stawell as the era that planted the seeds of social justice in her young mind. ‘A lot of my cousins would come and live with us – they’d get in a bit of trouble and be sent to Dad for sorting out. She said her Dad would take the cousins in, let them know they were valued and trusted, and then have them help out in the pub, teaching them a few life lessons along the way. As a family, Jo, her Mum (Kathy) and her Dad, spent time in Anglesea, Victoria, and then in Tasmania as her parents found work managing hospitality venues at golf clubs. It was a holiday from all this that brought the family to the Sunshine Coast for good. ‘We came on vacation to Noosa, loved it, and we never went back,’ Jo said.

‘For a while we were living in a caravan park at the end of Hastings Street. Then we rented for a while and eventually bought a house in Coolum. My parents ran the Luther Heights Camp at Coolum until they retired.’ Before Luther Heights, Michael and Kathy looked after the Noosa Bowls Club for about 10 years. It was here Jo said they really made deep and long lasting connections with the locals, particularly her Dad who was always helping someone out. ‘My Dad passed away three years ago and there were people who turned up to his funeral that I’d only ever heard about.’

For Jo, her first years on the Sunshine Coast meant catching buses to St John’s College in Nambour for study and to the beach for fun, and spending time with her family and a favourite aunty and uncle. She said her uncle, a lawyer, would often engage her in long discussions about justice, and right and wrong. He was her inspiration to try and achieve a high enough score to study law at university; however, it wasn’t to be. ‘I met my husband in Year 12. I was good at school, but I also enjoyed my social life… I didn’t get the marks to gain entry to study law.’ Looking for another way into university, Jo commenced an Associate Diploma of Recreational Studies at Queensland University of Technology in Brisbane, and took on a part-time job supporting people with disabilities and mental health issues.

‘Through my job, I quickly realised the level of discrimination that was occurring, and I applied and was accepted into social work at the University of Queensland. ‘I was still seeing my now husband – and I had a little green MG I used to fang up and down the highway.’ The final years of her four-year course involved placements with services requiring social workers. For Jo, this meant the Maroochydore Mental Health Unit and the Child Protection Agency. Two weeks after finishing her placements she had a job with Child Safety in Gympie and her career, working with families and young people, was underway. Jo’s passion for ensuring children’s safety and wellbeing had begun. ‘Wayne (her husband) and I had a house in Pomona at the time. I started out working in Gympie and then had a secondment to Roma. That taught me a lot about Aboriginal and Torres Strait Islander communities,’Jo said.

In Gympie, it was not unusual for Jo to be called upon by the local police to come with them when families were in crisis and it was felt it was no longer safe for the children to be in the house. Later she would hear from police that some of the houses she had been in had been raided and found to be full of guns or drugs or both. For Jo it was about the children and finding a way for them to have a good life. ‘I was always passionate about kids not having a hard time. It is constantly about a sense of kindness, and having the right to a happy and healthy lifestyle.’

On the home front, Jo and Wayne married in 1999, and had their first son, John, in 2001. Jo took time off from child protection work and when it was time to return, with a baby of her own at home, she decided against the child protection field, instead commencing an eight-year stint with Noosa Youth Service.

Wayne, a keen surfer with a love of all things water, had started out trying to make a living in landscaping on the coast before making the decision to attend Maritime College to train to work on ships as a seafarer – a job that paid better, but also took him away for months at a time. As a young family, Jo remembers at least four Christmases when Wayne wasn’t home, and plenty of birthday celebrations that were pushed back a few days to align with his return. She said she was blessed, with both of her children, to have her mother-in-law, Faye, who was an incredible support with the children in between her own work at the family business – Roff’s Fine Jewellery on Hastings Street. The couple’s second son, Dean, arrived in 2003 – prompting another career break for Jo – this time only for six months before returning to Noosa Youth Service. ‘I was with United Synergies. It was really creative work. Then I was organising student placements for the University of the Sunshine Coast and lecturing in social work. Then back to government, working in partnerships – bringing communities together with non-government agencies – but I missed the practice of direct work with children and families.’

Jo stepped back into Child Safety as the Acting Manager in Gympie; working directly with clients again. On the work front, it was where she wanted to be. At home, things got tough. Wayne was diagnosed with head and neck cancer in 2010; he was 45. ‘Apparently, we discovered, it’s really common in 40-60 year old men,’ Jo said.

The children were seven and nine when Wayne was put through the medical wringer with radical chemotherapy. The treatment was so harsh doctors feared he would not be able to eat and had installed a peg in his stomach so food could be injected directly if it was needed. ‘He was determined not to use it. All Wayne wanted to do was to get back to surfing. He realised life’s too short – he really focused and he never used it. He also decided we were going to buy a catamaran.’

After 12 months, Wayne was back at sea, Jo was working at Caloundra and the family were living at Sunrise Beach enjoying the beach life, fishing, scuba diving and surfing. Then, in 2014, Wayne’s mum died after battling breast cancer. Jo said it was a massive loss for the family – they escaped to Hawaii that summer with plans to come back and have six weeks off before tackling the next stage of their lives – only for Jo to be diagnosed with breast cancer. ‘I was 45. I took six months off work, had a lumpectomy, then chemo. On 11 September (2015) I finished radiation.’

After the cancer scare Jo said she thought hard about what next and decided she needed a change from the government work. She took a six-month role with local organisation, Integrated Family and Youth Service (IFYS) – and ‘found my tribe’. At work Jo is now managing a team of 26, most of whom are social workers, and leading the way in providing innovative support for those involved with IFYS Foster and Kinship Care. She speaks passionately about helping her team to go above and beyond to find ways of helping carers to navigate the challenges of family life when they are often juggling jobs and looking after their own children and others in need.

‘I guess as you get a bit older you work to leave a mark in your field. Knowing that, I will share our work and advocate for changes to the system. This can include presenting at national conferences or advocating with politicians – I will always go the extra mile. The work we do is really hard and we have to look after ourselves. Work on what you can do and do it to the best of your ability. ‘We achieve some really good outcomes and I’m proud of that. I have the privilege of seeing the kids on the coast grow up and turn out great.’

On the home front, the family did buy that catamaran three years ago and they’ve sailed it up and down the east coast. Wayne’s still working at sea, their eldest John is studying to be a sea captain at Maritime College in Tasmania and Dean is building his skills as an apprentice electrician. Jo has just taken up kayaking in Noosa with a group coached by Jordan Mercer.